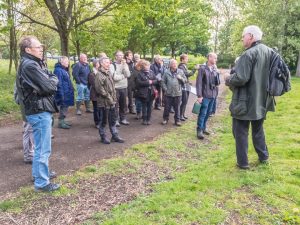 Members assembled at Linford Wood on Tuesday 2nd May 2017 at 7.00pm off Breckland, by the north-west entrance to the wood. Mike LeRoy gave a brief description of the history and ecology of the Wood, which was set out more fully in a handout that also had a map of the whole wood. They then walked together to near the centre of the wood. From here, five groups dispersed to note sightings of different species which they could submit for environmental records. Areas covered were largely in the north, east and centre of the wood. 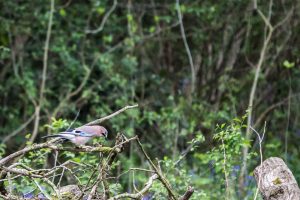 The mosses group, led by Frances Higgs, found nine bryophyte species, which she is submitting to the Buckinghamshire County Recorder for Bryophytes:

Another group, led by Martin Kincaid, counted the number of stems of Orchis mascula Early Purple Orchid, which they found in four sites across the north of the wood, with a total of 143 stems. A further site with an additional 25 stems was located later, giving a total of 168 stems observed within the wood. Their report with locations and numbers of stems will be submitted to the Buckinghamshire Vice-County Botanical Recorder as potential records to be held by the County Environmental Records Centre BMERC and will also be held by The Parks Trust, the owner of Linford Wood. 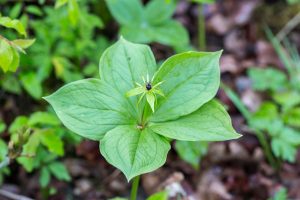 The ferns group, led by Mary Sarre, found: Dryopteris filix-mas Male Fern at five sites and Dryopteris carthusiana Narrow Buckler Fern at a single site. They also found Carex sylvatica Wood-sedge and areas of Paris quadrifolia Herb Paris which is in several clusters across the wood. 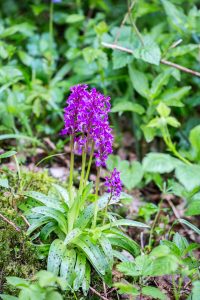 There were also many swathes of Hyacinthoides non-scripta Bluebell and Anemone nemorosa Wood Anemone, the latter nearing the end of flowering.