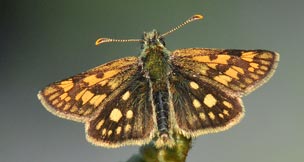 dispar, the Online Journal of Lepidoptera have produced a report A Study of the Life Cycle of the Chequered Skipper Butterfly Carterocephalus palaemon (Pallas)

Of all of the butterflies found in the British Isles, the complete life cycle of the Chequered Skipper is one of the most rarely observed, for several reasons. The first is that the distribution of the butterfly is restricted to north west Scotland where the level of recording is relatively low. The second is that, while many enthusiasts have made pilgrimages to see the adult butterfly, very few have put the same effort into locating the immature stages. Finally, the ecology of the butterfly requires the observer to put in a significant amount of time before they are rewarded with views of all stages. In this article, the author summarises his observations over a three year period, from 2014 to 2016.

Click on this link to read the rest of the article.