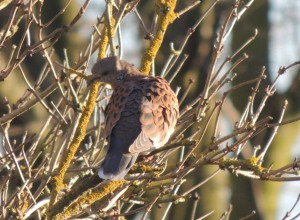 Turtle Doves spend the winter in West Africa, arriving back to the UK in April to breed. Once in the UK, they prefer areas of bare ground with open water and mature scrub areas in which to nest, with a plentiful supply of seed to feed their young.  Before the BBS began in 1994, changes in land management had already impacted the population greatly and the species has continued to decline to this day. The highest remaining breeding densities occur in eastern and southern England, and they have now disappeared from large areas of the country.